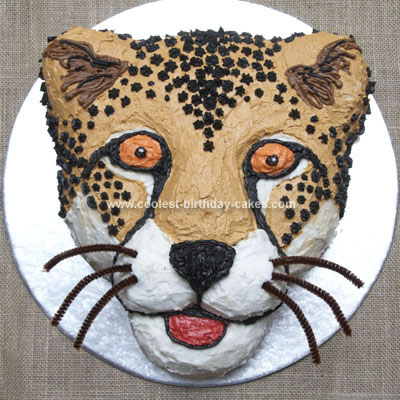 I made this Cheetah Cake for my son’s 5th birthday party. He loves the cheetah and from that we decided to do a Africa Safari party, with a track hunting game (obviously with a treasure at the end), an elephant pinata etc.

I started the cake off with a cake pan in the shape of a teddy bear, which provided me with the round shape for the head and ears. The bottom part of the mouth was added to elongate the face, using a half moon shaped pan. The nose was also build up with extra peaces of cake. The extra parts I “glued” on with caramel.

I shaped the ears a bit more pointy, using extra icing sugar, most kids won’t mind that. I used photographs of real cheetahs as a reference for the colouring with the icing, which I only smeared on, to give a bit of a rough texture for the fur. For the details I used a icing tube, specific the star end for the spots.

For the whiskers I used brown pipe cleaners.