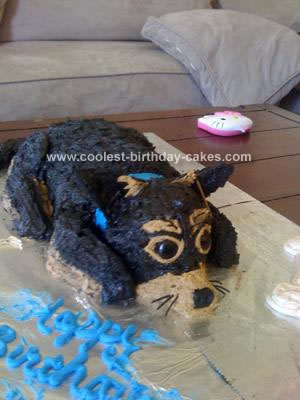 I made this Chihuaha Cake for my nephew’s birthday. He wanted his Chihuaha dog as a cake. First I stacked two cakes on top of each other and carved the body design out of cake. Then I frosted the entire cake lightly with buttercream. Then I went over it with a no. 47 tip to make it look like fur.

I made the ears out of fondant by rolling it out and cutting the shape. I let it dry around a shot glass so it would dry bent. I made some whiskers out of fondant that I just rolled really thin and let them dry. To make the eyes I melted some sugar with a little brown dye until it got caramelized, then I put a very small amount of black decorating gel into a 1/4 tsp measuring spoon that I lightly sprayed with cooking oil.

I put the decorating gel into the center to form the pupil. Then I poured the caramelized sugar into the teaspoon on top of the black gel. I lightly tapped it on the counter to force any air bubbles up to the surface, then I let it dry. After it was hardened I slid out the eyeball and made another.

I made the dogs markings with a lighter frosting and a round tip for the face markings. I made the nose out of fondant that I just shaped by hand and used a round paintbrush handle to make the holes of the nostrils. I made a collar with blue frosting and a flat tip. Then I added all the fondant pieces and the eyeballs. I wrote happy birthday on the cake board itself and also made a milk bone out of frosting, on the cake board, which the kids immediately stuck their fingers in. It was very hard to make the frosting black.

I used black Wilton food dye but I was dying the chocolate buttercream frosting and it took a lot of dye to get the right color.