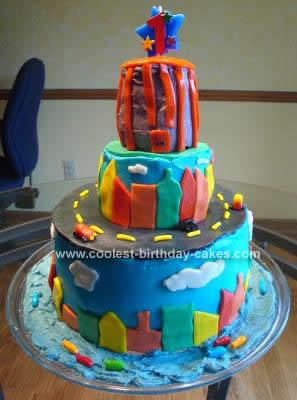 For my son’s first birthday I wanted a King Kong-type theme with the giant baby smashing the city. (I have an odd sense of humor.) The King Kong cakes I found were too dark and gray for a first birthday, so I decided to go more whimsical and Dr. Seuss-like and made this City Scene First Birthday Cake .

I filled and iced the 2 8-inch cakes in sky blue buttercream. I made building silhouettes, a road, grass and vehicles from bright colors of marshmallow fondant a few days earlier. I centered the black road piece on top of the 8-inch cakes. I applied the buildings around the 2 bottom layers while the buttercream was still moist. I then filled and iced the 2 4-inch round cakes with the same sky blue buttercream and centered them on the “road.”

Next I added the buildings around the 4-inch cake. I also added clouds. I then made the road lines and vehicles out of the marshmallow fondant. Next I placed the “grass” on top of the 4-inch cake. I topped 4 cupcakes and cut a skewer to hold them in place with enough extra to anchor them to the 4-inch cake. I pre-made a hole in the grass fondant with the skewer. After threading the cupcakes on the skewer, I frosted them with purple buttercream and added orange fondant “windows” and “doors.”

I placed the cupcakes on top of the 4-inch cake and added the 1 birthday candle. I made slightly darker blue buttercream frosting for around the 8-inch cake as water and placed in candy fish. (I wanted candy ducks and candy boats as well but couldn’t find them.)

This is the first time I’ve ever worked with fondant and it was extremely easy. Next time I would cover the cupcakes and possibly the lower cakes in fondant so they would be smoother.

I baked the cakes ahead and froze them and made the fondant shapes a few days ahead as well to avoid a time crunch just before the main event.

Bryce’s Cake with a Road