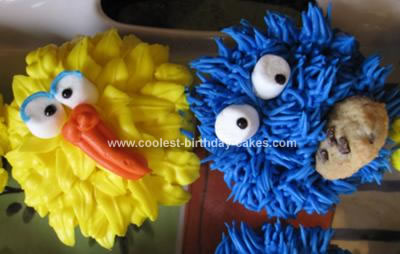 I made Big Bird and Cookie Monster cupcakes for my nephew Brandon’s 1st birthday party on Sept. 13. My sister-in-law couldn’t find Sesame Street cakes at the bakery that used icing to create the characters. They just used figurines or Sesame Street plastic rings.

After looking at some Sesame Street cakes online I came up with my own version of how to portray the characters on cupcakes.

Step one: I found that a layer of frosting in the color I was going to decorate with helped to prevent patches on the surface.

For Cookie Monster I used a “grass” tip to give a fur effect in Wilton royal blue paste color. The miniature chocolate chip cookie in his mouth is from Trader Joe’s. A dollop of icing behind the cookie helped to hold it in place. Big Bird’s feather effect was achieved with a “leaf” decorating tip and was applied first around the edges, moving into the center in Lemon Yellow icing. The beak was applied with orange icing from a large round writing tip.

Both characters got mini-marshmallow eyes with a dot of black gel for the pupil. I was worried the gel would bleed onto the marshmallow, but it didn’t. Some candy company could make a mint by producing a round white candy coated chocolate ball the size of a gumball for use as character eyes for baking!