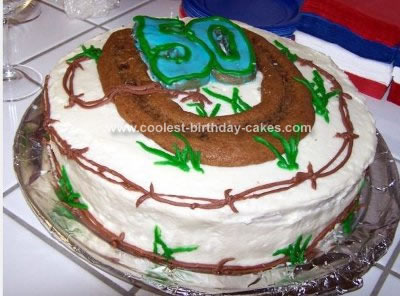 I designed this Country Horseshoe Birthday Cake for my brother’s 50th birthday. This 9″ two layer cake is basic chocolate with cream cheese filling and basic white frosting on top.

After a lot of experimenting with chocolate, both dark and baker’s, along with rice crispy treats, I decided to make the “horseshoe” and the “50” out of gingerbread, which I pressed the indents into and make the nail holes in while it was fresh from the oven and still pliable. After it cools it would just break. I know, because I had to make it twice.

Then I piped on 1/2 of the green grass around the base and top and placed the “horseshoe”. Rotated the cake, I set a single strand of brown piping around the cake and over the horseshoe. I then followed the first line with a second, crossing the lines at regular intervals for where I wanted the barbs on the wire to be, piping in the barbs next.

Then I did a bit more grass over the wire here and there to give the impression it was “in” the grass, rather than on top of it.

Lastly, I coated the “50” with a blue icing glaze so the color would stand out and placed it at an angle at the top of the horseshoe.

I’m happy to say it was a hit with the horsey crowd at my brother’s birthday party bbq.