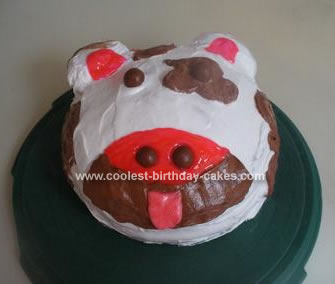 This Cow Cake was my daughter’s 8th birthday cake. It is made from 2 8in round cakes stacked. I frosted the whole thing white. In order to make the brown spots shaped as I wanted, I used a butter knife to lightly trace lines in the white frosting that I filled in with piped on chocolate frosting which I spread around a bit once on.

I used a small bowl to trace the mouth area, tracing around half of the outside lip of the inverted bowl with a butter knife in the white frosting. I filled part of that in with chocolate frosting and pink gel for the rest. The tongue is a melted pink candy that is usually an individually wrapped cube (not STAR shaped as the name would indicate) in a package with yellow, red, and orange fruit flavored candies.

The ears are one cupcake cut in half with pink gel icing inside. The nose holes and eyes are malted milk balls.