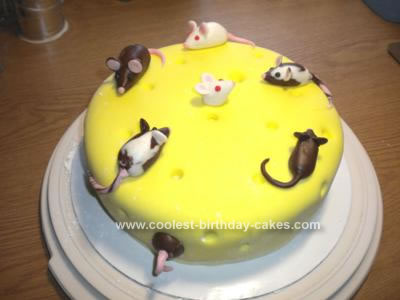 My daughter wanted a “Critter” cake for her 11th birthday, but the idea of making a cake shaped like a mouse or hamster did not seem that appetizing! She wanted the cake to be a lemon cake, so I thought I would make it look like cheese and cover it in mice! This took a little bit of research, and I was scared to try fondant for the first time, but it was really very easy to do!

I baked the lemon cake and frosted it with butter cream icing that I made myself, and added the juice of 1 lemon to flavor it. Once it was frosted, I let it sit for an hour and then I took a damp paper towel and lightly rubbed the frosting smooth. For the fondant, I used a marshmallow fondant recipe which was really easy. I used 1 bag of marshmallows and melted them in the microwave with 2 tablespoons of water. Once melted, I added 4 cups of powdered sugar. It does take some time to work this in, but if you cover your hands in Crisco, you can knead it in without it sticking to you. Later, I added food coloring gel to color the fondants.

After I covered the cake in yellow fondant, I used the end of a wooden spoon to indent the holes for the cheese. For the mice I used white and pink fondant, but I made a new batch of chocolate fondant by adding cocoa powder. This ended up tasting like tootsie rolls! The mice were easy to make, and I colored the eyes black or red using edible color markers. My daughter’s favorite mice were the ones poking in and out of the cake!