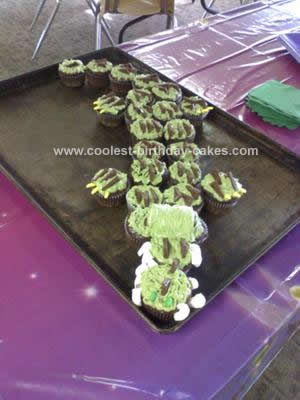 I actually saw this idea for a Crocodile Birthday Cake in a cupcake book. My daughter was having a Tinkerbell birthday party for her 4th birthday so in addition to the Tinkerbell doll cake I made her, I thought I would make her the crocodile from the movie.

I baked 24 chocolate cupcakes, just using boxed cake mix. I tinted the frosting a murky swampy green with green, orange, and brown. I frosted all the cupcakes (the book has you do scales) with the green frosting and then lined them all up on a cookie sheet in the shape of a croc. I then cut a Hershey’s bar squares in half corner to corner and used those for the scales on the back. The claws are just banana runts.

The eyes are just 2 marshmallows frosted with the same green frosting and then two brown M&M’s on the sides for the pupils. For the teeth I just took a pair of scissors to a couple marshmallows to make them look like teeth. And then the nostrils are just 2 green M&M’s.

My daughter and all her friends thought this cake was awesome! And it was super easy to make!