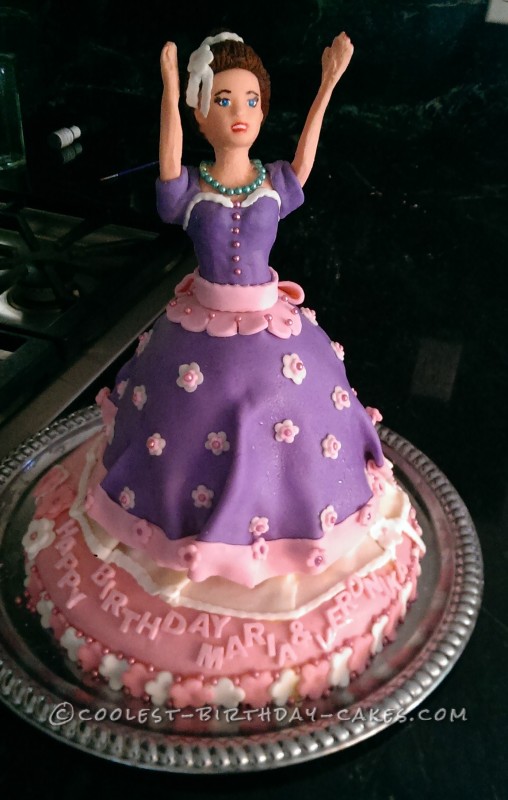 This was my very first fondant cake!! My twin nieces love anything that has to do with princesses. For their 4th birthday they got a regular Barbie doll cake (the one with a plastic doll on top), they were on cloud nine, they thought it was the best cake ever!! I, on the other hand, thought that the inedible doll kind of ruined the whole thing. So this year I decided to make a princess cake where everything would be edible! I watched hundreds of YouTube videos, purchased all kinds of tools, gum paste, fondant , etc.

I decided to make a silicone mold of a doll head. I wasted quite a bit of fondant before I finally made my princess head! It came out looking perfect! I let it dry for a couple of days, then I drew on her eyes, teeth and lips and attached “hair” made of fondant. The rest was a piece of cake (pun intended). Funny enough, even though I had bought quite a few cake making tools, the one “tool” I used the most was a regular toothpick! I used it for everything from making her fingers to her hair to the bow.

When the whole thing was assembled, a piece of one arm  (at the shoulder) broke off making it much shorter than the other! I had no time to have a new one made, this is why I decided to have my princess with her arms up (this way the difference is not noticeable), and called it “Dancing Princess”. My nieces couldn’t believe the whole thing was a cake and kept saying “she looks just like Barbie!” and  “how did you do it?” Half a year later they still talk about this cake.