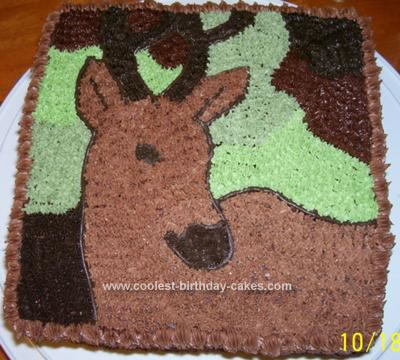 I wanted to make a deer/hunting type cake for my brother in law’s birthday. I just wasn’t sure about doing a 3-d version of a deer. I started this Deer Birthday Cake with a chocolate cake mix and made an 8 inch square cake.

I cut the cake and put a layer of homemade chocolate buttercream frosting in the middle. I put a crumb coat of icing on the cake. Then I took a simple deer picture and outlined the design on wax paper using a small round tip and some of the icing. Then just lay it on the cake and smooth a little, pull it off and the outline of the picture should be there. I then used the same small tip and went back over the outline and filled in the deer using a star tip.

I used black icing gel to darken the chocolate icing for the antlers and mixed in white buttercream to create a lighter brown for the deer. I wanted to try to do the background in camouflage but my green colors were a little too close in color. I just used a large star tip to do a border on the top & bottom of the cake.

I had never tried the image transfer method before this and I have to say it is really easy. I really was happy with how it turned out. This was also my first time making buttercream icing instead of using canned icing and it was really good!

Moose Cake for The Mighty Hunter