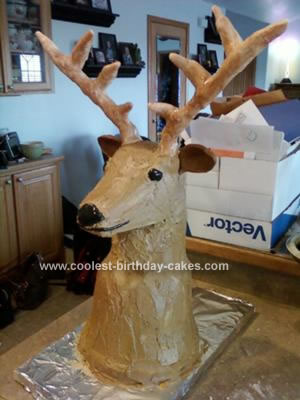 This was the largest cake, my father-in-law is a big hunter, and had given my boys both deer mounts for Christmas so me and my wife thought we would give him a deer cake for his birthday.

We started by making a stand out of a 1×12 board then made a deer shape head for the other part of the board. We then went to the hardware store the guy asked me if he could help me with my plumbing and I said ‘no i am making a cake not doing plumbing’ got a funny look, told him what I was doing, he said bring a pic back and they will put cake supplies of the sign out front also, lol.

Anyway took 1/2 inch PVC attached to the board then started building a skeleton, I then made several round cakes different sizes placed them over the PVC with a layer of icing between each.

For the head, I attached the board I had cut earlier, then for the head I used an aluminum loaf pan and bent it to a rounder shape then placed it on the board. I took PVC elbows and Pisces and made my horns, I then covered them with gum paste, and carved lines in them, I attached them to the head with a coupling, then carved my head, covered it with icing a tan color then painted the horns with some brown food coloring that I mixed with a small amount of water.

I used black fondant to make the eyes, the mouth and nose. After this I molded my ears from gum paste (that was a tan color also and attached with dowels. The hard part was that it was approx 3 ft. tall and we had to transport about 50 miles… had some slight cracking around the head and neck but took extra icing and covered it up and could not even tell.

Everyone loved this homemade deer cake and was shocked, hope you guys like. Thank you very much Ric.