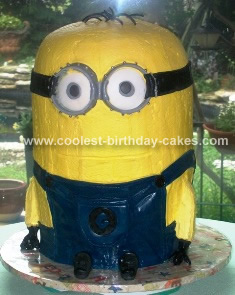 This Homemade Despicable Me ” Minion ” Birthday Cake stood approximately 38″ tall and was all cake. Three flavors as a matter of fact. Chocolate Fudge, Strawberry and Banana. Three 10″ round layers of each flavor of cake was baked, separated with foam core board for support and stacked on top of each other. A middle support of PVC tube was attached to a round circle of plywood to further stabilize the “Minion” for support during travel.

His arms and feet were made of cereal treats and gloves, boots of brown modeling chocolate, dyed black.

Minion was stacked,shaped to form, crumb coated with a pale yellow butter cream icing – then chilled. The next morning a final coat of a true yellow butter cream covered the cake. I have found that if the base coat or crumb coat of the icing is dyed closer to the color you want, it fades less when final color is covered. It’s reminds me of a primer coat when painting a room.

He was then dressed in his overalays with navy fondant and “G” attached to the front pockets. A tracing wheel was used to make the stitching marks.

His arms and stubby legs were added with toothpicks and more yellow butter cream icing. His eyes where made two days before with round cookie circles and silver dragrees for screws, the rims and googles where also made of modeling chocolate. Licorice was used for the strands of hair. Everything accent was then attached with butter cream and chilled one final time before delivery.

The client was so happy, her son did not want to cut it and wanted to save it till school started to show more friends! 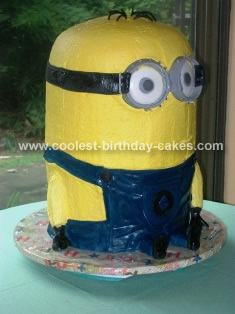 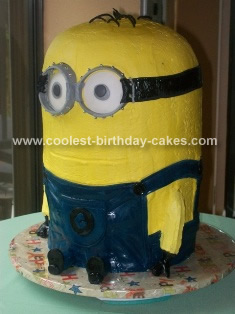