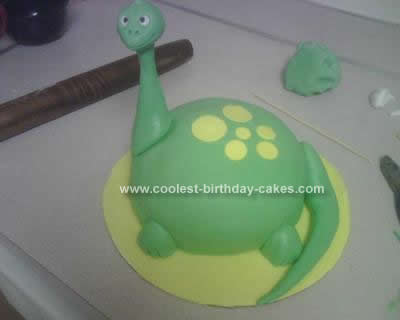 I had so much fun creating this cute “dippy dino” for a friend’s party. The Dinosaur Birthday Cake was much easier to make than it looks and the only complaint I got was that “he didn’t taste anything like dinosaur meat”. Haha!

I used a glass bowl to bake this vanilla cake to give it the rounded shape. After cooling, I cut it in half to apply some filling and then put the 2 pieces back together.

After icing the entire cake with butter cream frosting, I laid green fondant over top, smooth and tucked the edges underneath.

For his head, I shaped a sausage like neck and shaped the bottom to fit flush against the body of the dinosaur. I used a dowel to put it in place. Then I shaped the head with fondant until I had a round head, pinched at the front to form his mouth/nose. I used the end of a paint brush to shape his eyes, his nostrils and the fold on top of his head for character. I also used the end of it to make the holes at the corners of his dippy smile! I used a sharp knife to connect the smile.

For the details, I used some yellow fondant to make various circles on his back (small fondant circle cookie cutter like tools) and then also filled in his eyes with small dots of white fondant. I used a black marker for the pupils.

I used remaining green fondant to shape flat bottomed triangles for the feet. I used the paint brush end again to make lines for the “toes” and then stuck the feet to the dino sealing it with frosting. For the tail, I shaped another long sausage and kept slimming it down until a point at the end. I secured it with another dowel.

For a fancier effect, I covered the round cake board with frosting and yellow fondant before I placed the finished dino on top.