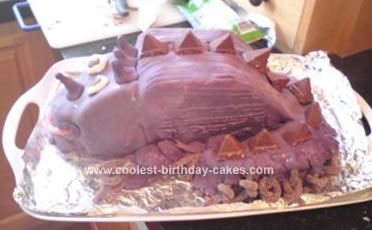 I made this cake for my friend’s son’s 4th birthday. This was the first time I had ever made a ‘special cake’. I had a trial run and this was the second version.

I used two cakes one was an 8″/20cm deep round cake tin and the other was a deep rectangular tin 7.5″ x 11″/19cm x 28cm. I used the ingredients for a 9″ cake for the rectangular one. I made a Madeira cake recipe because it is firmer to ice.

I cut the rectangular cake in half to give 2 x 7.5″ x 5.5″ pieces. I placed them face to face with the cut side outermost as they were smoother. I shaved off a curve section to give a body shape. I halved the cake horizontally and filled with butter cream and then put butter cream between the two halves.

I used a glass with a diameter of 3″/8cm to cut three cylinders from the circular cake. I took one of these cylinders and cut it in half and sandwiched it with butter cream, I cut a second one in half and added half a cylinder to the first using butter cream to stick them together. I used a little more butter icing to attach it to the body. This gave me the basis of the head. I placed the other 1/2 vertically against them for the nose. I used the third cylinder filled with butter cream for the start of the tail (placed upright).

I cut out the parts of the round cake between where I had taken the cylinders and placed them curved side upwards on top of head to help give the shape. I used a similar piece and a curved segment for the tail (butter cream again to fill and join).

To decorate I coloured 1kg piece of fondant icing purple except for a tiny piece I kept back and rolled it out to approx 48cm x 44 cm (most difficult part) I lifted and placed it over the dinosaur, smoothing it around the cake. I used some of the excess icing to make 4 cone shapes for horns and made legs out of balls of icing squished together.

I used cola laces as claws trimming the ends to a point and a strawberry lace for a mouth. I rolled the white icing into two balls and squished a chocolate button into the centre to give the eyes. I used Toblerones for spikes on the back and more cola laces tied in knots and hung down from the tail. I fixed all these extras with a bit of water and a press down. I pressed a fork down the side for effect and also to cover up where the icing was cracked!