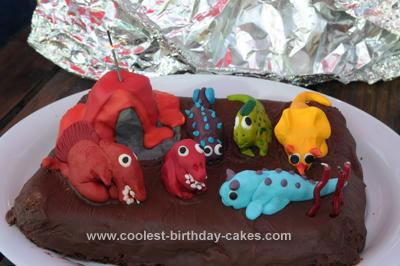 My son is obsessed with dinosaurs and wanted a dinosaur cake for his 3rd birthday. As he isn’t fond of icing I decided to use chocolate instead to resemble a tar pit full of dinosaurs.

I made a rectangular chocolate cake which I then covered in chocolate ganache – dark and milk chocolate melted with some butter and a small amount of icing sugar to help it set. I made the dinosaurs and volcano from fondant icing (moulding icing) which I coloured using paste food colourings. Moulding icing is really easy to use, just like plasticine!

I kept some plain white icing to make the little teeth for the T-Rex and spinosaurus. I mixed some green food colouring with water to paint spots onto the green parasaurolophus. I made red and orange royal icing (icing sugar and egg white with food colouring added)which is quite liquid but sets really hard to drip down the volcano as lava.

I added a sparkler to the volcano which we lit to make it look like an eruption.