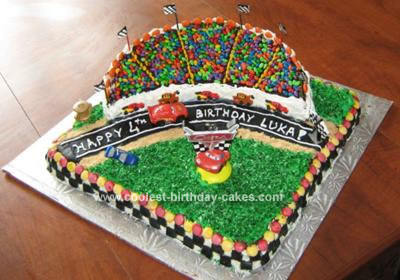 This Disney Cars Birthday Cake is my second Disney Cars cake and I made it for my son’s 4th birthday. I have to admit that I searched far and wide for inspiration (this web site, YouTube, Google etc.). The inspiration for this cake came off of one of Car’s posters where you see the track with main 3 race cars and the stadium seating to the left.

The cake was a no-bake cake that was made with crumbled tea biscuits, some banana chocolate covered marshmallow candy (cut up), and mixed with pudding (made with 1/3 of the milk required) that was combined with melted butter and dark chocolate. I like this cake as I can put it in molds and don’t have to worry about how to get them out, I just put saran wrap under them.

The audience was created from chocolate covered sunflower seeds that I placed on a chocolate glaze I applied prior to putting the seeds in. Stadium edging was done with orange smarties. Checker flags were made with a checker cutout from a Car’s loot bag that was placed on a tooth pick. I used one of my son’s Lightning McQueen cars for the top. Candles (the cup, flags at the finish, blue car that went off the track) were from Wilton’s “Race Car Candles and Cake Decorations” set, and the fourth candle was Disney’s Cars candle.

The cake was a big hit with both adults and the children. We had 50 people at the party and still had lots of cake leftover ( made 3 batches of the regular cake recipe).