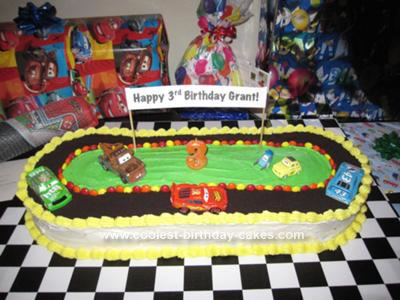 My son wanted a Disney Cars themed cake for his 3rd birthday so I created this Disney Cars Race Track Birthday Cake using bits and pieces of ideas from several photos I had seen online. I wanted it to look cool but it still had to be do-able within my realm of limited cake decorating skills.

I also didn’t want to use a lot of artificial coloring and it had to big enough to feed all the kids and parents at the party. This is the best I could come up with.

The cake is made by stacking two 9 x 13″ rectangular layers (one white, one chocolate) for the middle section. The ends are made by cutting one 9″ round chocolate layer and one 9″ round white layer in half, then stacked one of each kind (white and chocolate) and arranged on either end of the large rectangular base (I saved the two left over rounds to make a cake for our family since the big one would be eaten at the party venue).

I used icing to ‘glue’ the ends to the middle section. I used a toothpick to draw the track outline and used a small jar of store bought chocolate icing to make the track and then covered it with crushed Oreo cookies (run them through the food processor – remove the white center first!). The infield is made of white icing I tinted green and the entire rest of the cake is covered in homemade white butter cream icing. I tinted a small batch of icing yellow and used a decorator bag with a star tip to pipe a top and bottom edge.

My son loves M&M candies so I thought those would be good to edge the inside of the track – kind of like the bumper things at the real race track. I made the sign on my computer and taped it to two wooden skewers and added a #3 candle in the middle. Since my son has only seen the original Cars movie I used his favorite toy cars (washed first) to decorate the cake simulating a race with spectators.

Because the cake was so long and heavy I couldn’t find a cake board at the local craft shop to fit, I made one using three layers of heavy corrugated plastic that I covered with a checkered vinyl tablecloth remnant I found at the craft store. Unfortunately the entire thing did not fit in my refrigerator but since I made it the night before I just used a very large box to cover the cake until time for the party.

Overall, I was pleased with my effort. All said and done it took me about 10 hours to bake the cakes, make three batches of homemade icing, gather the supplies, make the board, decorate, etc…. But let me tell you, the look on my son’s face when he saw it was worth every minute! He loved it. All the kids at the party were in awe. He still talks about it. Not sure how I’ll top it next year. Guess it’s back to the internet for more inspiration!