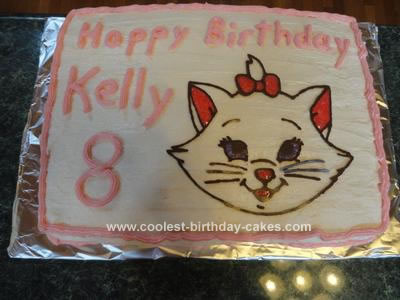 This Disney Marie cat birthday cake is the cake I made for my daughter’s 8th birthday. I got the idea from this website so the least I can do is try to return the favor. I have no artistic skills, but I can trace! I hope Disney doesn’t track me down.

I just made a regular rectangular cake. Frosted the cake with white frosting and tried to make it flat. I found a picture of Marie on the internet. I think I searched “Disney Marie cat image”. I found a picture of a pin that Disney put out of Marie. I printed that picture and enlarged it to the size I wanted. I made mine take up as much of an 8 x 11 page as I could get since I used a large Wilton pan that used two cake mixes.

Then I took my picture and put a piece of wax paper over it. Someone on here mentioned using black frosting for an outline like this, but I wanted the edges of Marie to be nice and sharp and not smudge. So I melted chocolate and used a Wilton writing tip (you could also cut the corner off a Ziploc bag) to trace the design onto the wax paper.

Then I filled in the spots for the ears and nose and tongue with premade pink glitter frosting in a tube. And last I used purple sugar crystals to fill in and color the eyes. I wouldn’t use the sugar crystals again though because they are too hard to get in the right tiny spot. At one point I was using tweezers to pick them up where I dropped them in the wrong spot. So without any artistic ability of my own, I made an awesome cake.

My little girl hovered around me while I was tracing and was totally impressed. She loved it so much she said she wants the same cake next year. I need to work on my writing in frosting skills, but I am definitely pleased with how it all turned out. Thanks to the website for the beginning of my idea!