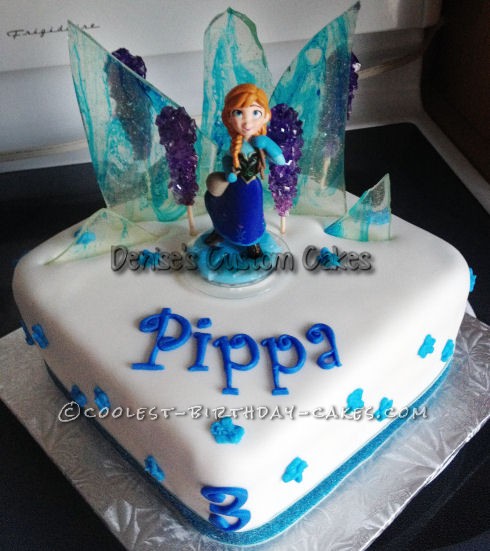 When I was asked to do this Disney Frozen cake, my first thought was how to do the figurine… fondant or buy a toy? I decided to buy a toy topper because the fondant version would be a lot of work, therefore upping the price significantly for the cake.

You would think one of the year’s most popular movies would have a lot of selection as far as toys and figurines go, but that was not the case at all. The client suggested using a Disney Infinity figure, I ended up finding Anna at Target and I knew the rest of the cake would be a breeze.

I looked through several ideas here at Coolest Birthday Cakes, and came across one that used candy mints to make ice (I wanted to link to the post but I couldn’t find it again. There were several ideas I wanted to use to make this cake, and I really enjoyed putting them all together.

The cake itself was a rich chocolate cake, baked in two eight-inch square pans. It was filled and crumb-coated with vanilla butter cream icing, and covered in white fondant. I bought some pretty, sparkly blue ribbon for the trim.

The ice was made by melting candy mints in a Pyrex loaf pan (the post I used the idea from mentioned using a silicon baking dish but I couldn’t find one anywhere). I poured the melted mixture into a foil-lined baking dish and added a few drops of blue food coloring, and swirled the coloring into the mixture with a silicon spatula, and let it cool completely.

The loaf pan was destroyed in the process, there was no way to chip all of the hardened candy off of it, but what’s $6? When it was time to put the “ice” on the cake, I broke it into three large triangular pieces (some smaller pieces also broken off of it in the process). I pushed the large pieces into the cake, and two of the smaller pieces at the sides. I liked the way the “ice” sank into the fondant like the fondant was snow.

The rock candy was purchased at Bulk Barn, but they were discontinuing it, and I didn’t get a very big selection of colors. They had red, purple and green left, and I had been hoping for blue and white. I bought the purple ones and they did the job! I had the wooden knobs at the bottom of them cut off and I pushed them into the cake behind the ice shards.

I put a dollop of butter cream on the underside of Anna and put it on the cake in front of the ice, and used my Tappits with blue fondant to make the letters and the number 3. And finally, I tinted some butter cream blue and piped some stars all over the cake for the finishing touch.