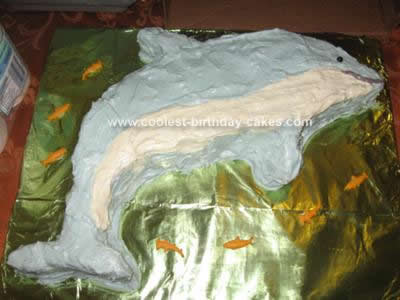 My sister-in-law loves dolphins and we have this tradition now that whose birthday it is will get a special cake. So I wanted to make her a Dolphin Birthday Cake Design. I got some ideas from this website and then drew a template on paper and cut it out making sure it would work with the size pan I had. I used a very large baking pan (like a lasagna pan) I used 3 boxes of chocolate cake mix which took about 1 1/2 to bake. I had to even out the top by cutting off some cake before flipping it over to prevent it from cracking.

Then I put the template over the cake and just cut the cake shape out. I had to use some of the scrap pieces to add on to make to tail/fin. My sis-in-law also loves chocolate frosting but being I needed blue and white frosting I decided to make my own white chocolate frosting. I melted 2 bags of white chocolate chips in microwave and added them to 2 cans store bought vanilla frosting and a large container of cool whip. I mixed them all together and then put some aside to keep for the white belly and used blue food coloring to make it blue.

Make sure the cake it cooled before frosting and I have to be honest and say it was very difficult to frost with the particular mixture….but tasted REALLY good…..and being the cake was chocolate the crumbs were spreading around but once it was all done it didn’t look bad at all. It took over an hour to frost the cake.

I used a jellybean for the eye and then made some grey frosting and piped it to make the mouth. The cake was a big hit and oh so yummy with chocolate cake and white chocolate frosting.

I cut out cardboard as the bottom and covered it with aluminum foil then clear green wrapping paper (didn’t have blue) but it looked really nice. Had some shark crackers and put them around the dolphin for added fun.