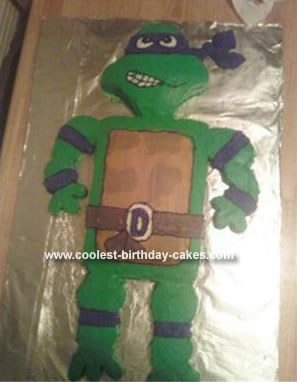 My son wanted the ‘purple turtle with the big stick’ for his birthday cake. So, my quest to make a Donatello Birthday Cake came to be. We baked a 13×9, 8×8, and 2-loaf pans.

After cooled, the 13×9 became Donatello’s chest. I cut his head out of the 8×8 pan and put it on top. Then, I sliced each loaf pan in half, then cut out Donatello’s arms and legs out of each one. I mixed up the various colors of icing: green, brown, black, purple, and bronze.

I iced Donatello’s chest first with the bronze using an angled spatula. Next, I iced with green around the bronze chest. I then iced each of Donatello’s arms and legs and attached them where they’re located. I did the same with his head. I used icing bags for the remainder of the icing.

I used the purple again for the letter ‘D’. His was smeared on with the angled spatula with white icing. After, I went around with the black and the lining tip to outline everything.