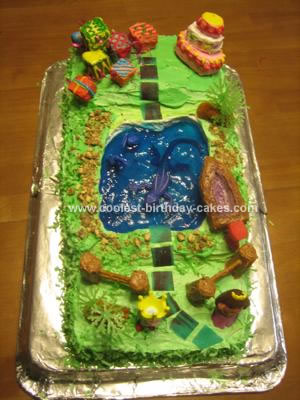 My daughter wanted a Dora cake for her 3rd birthday, and it has been a long-lasting tradition in my family to make our own cakes, so I went for it. First I searched the Internet, including this site for ideas of a Dora Birthday Cake. Then I sketched out my own ideas and thoughts and settled on a three-leveled cake. Each level would represent part of Dora’s journey to her own birthday party, like in the cartoon.

The next day I carved all the little pieces: boat, fence, mini-3-tier cake and presents out of frozen pound cake. I also carved out the “lake” in the middle tier and frosted the whole thing in light green frosting, except the inside of the “lake” was left white. Make sure to seal the lake so the Jell-O doesn’t leak into the cake. I also used green-dyed coconut for grass and broken up cookies for dirt. I molded a piece of gum for the boar motor.

On the night before the party I frosted all the little pieces like the fence posts and the boat, which were brown, the cake that was pink with gel decorations, and the presents were all different colors with gel decorations also. Then I added the blue Jell-O lake, using the jiggler recipe on the box. I inserted a plastic lizard, and some birds into the Jell-O after about 1/2 an hour.

The morning of the party I put it all together with toothpicks, added the plastic figures and a bit of frosting, and off to the party we went. I was a HUGE hit and I am very proud of it!