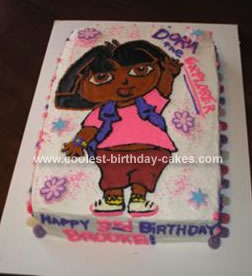 I made this Dora cake for my niece’s 3rd birthday. I thought this was going to be the easiest cake to make, but it turned out taking me about 7hrs total!

I first made a homemade white cake in a 9×13 cake pan using 11 cups of batter. I then made homemade buttercream. I had made these the night before I did the decorating which saved me a lot of time.

I then covered the cake with the white buttercream. I then separated the remaining buttercream into small bowls to prepare the colors I needed to create Dora. I had printed a picture of the internet as a guide.

I thought I had all of the colors correct, but I found later after it had dried that the coloring I used for her skin was darker then I had intended. Lesson learned make it lighter then you want!

The most time consuming part of this project was preparation for coloring all of the icing and putting it into piping bags. I also think I could of saved a lot of time if I had used a template instead of piping on Dora by hand.

The best part of the project was to see my nieces face when she saw the cake! She is Dora’s biggest fan and she just loved it! So worth the hours to witness that!