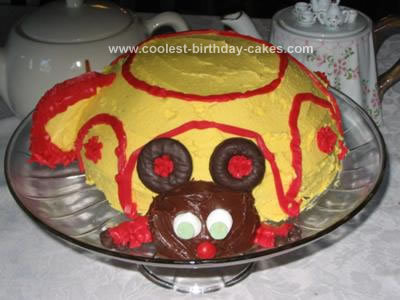 My daughter has a mid-summer birthday and it is often hard to get friends together for a birthday so we decided to have an Unbirthday party before school let out to celebrate her birthday. She specifically requested a dormouse cake. What to do? Oh my, oh my! Technically in the movie the dormouse is in a teapot, under the lid. Teapot cakes looked cute, but also complicated and possibly likely to collapse? And I just don’t have time for rolled fondant. Something SIMPLE and EASY was needed! So, I decided the dormouse would be under a teacup. We were already having a tea party and making flower arrangements with teacups, so it seemed that this would carry on that theme and be acceptable to the unbirthday girl. And it was!

I baked the cake in a Pyrex bowl for the teacup and also a small amount in a Pyrex custard cup (about ½ full) for the dormouse. I placed the baked cake on a glass pedestal (elegance is required even for a Mad Hatter tea party!) and iced it with yellow butter cream frosting. My unbirthday girl picked yellow and red as her colors. If your bowl did not leave the cake with a slightly flat bottom for the teacup, then you may have to trim it. You do want the cup to have what appears to be a flat bottom. This is where the candles can be placed or any birthday message written.

Decorate the teacup cake with a design to imitate a teacup, making sure to leave an undecorated spot for the dormouse. The handle of the teacup was a large English biscuit (cracker-like cookie) pushed into the teacup cake and iced to match the rest of the teacup. The red icing was one of those tubes that come with the decorator tips that can easily be found in the cake mix section of the grocery store. This was the first time I had ever used one of these and thought the icing was a little thin, but it was a fast way to achieve the very dark red that the unbirthday girl desired.

The small dormouse cake from the Pyrex custard cup was then placed next to the teacup cake – I trimmed it so it would be more round and lay flat. Chocolate icing was used to ice the dormouse part of the cake. The dormouse’s ears were made out of chocolate covered jelly-rings with the hole filled in with the red icing to look more like big ears. Any chocolate covered cookie would work, too – just put the icing in the center. The nose was a red Skittle candy (a small jelly bean might have worked too – you want it to be round, however, and not flat like an M&M), the eyes were a mini marshmallow cut in half with a green (mint) chocolate chip pushed pointy end in the cut end of the marshmallow, and the arms were simply icing piped onto the glass pedestal up to 3 chocolate chips for each paw.

It took less than 2 hours to make this cake. Someone with more skill could probably make it look a lot prettier, but I offer this as an example of a unique and easy cake that anyone should be able to make. The 8-yr-olds at the party were simply delighted with the cute little Dormouse Under the Teacup for Unbirthday Party Cake.