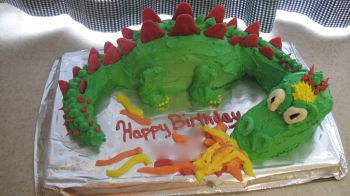 This Dragon Birthday Cake is a cake I made for someone who really likes dragons and dinosaurs. It was made at work, for work, so supplies were limited and I didn’t have much money to work with.

It is made out of 2 round cakes and two cupcakes. For this cake I did not level my cakes. I cut the first round cake in half and stood them up to form the body. The second cake was then cut to make the head, tail, and neck (see diagram). Two cupcakes were made.