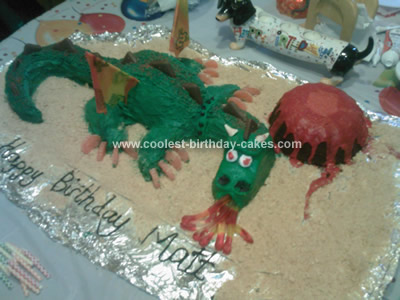 I used the recipe from another dragon cake and i added a volcano to it. And was doing good till I got to the “cut the ten different shapes out of one cake par – step 6 I believe” . So I just started my own twist to it. Luckily, I baked 3 9″ round cake instead of just the two.

I cut one in half like the other “Dragon cake” then I used one for the head, neck, and legs and the first “fat” part of the tail, the last cake to cut the curve of the rest of the tail. There was a little cake left so I gave it to the kids to decorate and keep them busy while I finished.

The decorating. I had the great idea we were gonna use the round tip and make awesome scales all over the dragon, well that’s all good in well if you go to the gym a few times a day and have several hours. I’m sure it would look awesome. But with that said, I just “scaled” the back before I got carpel tunnel. So then, well we were going to star tip the rest. Long story short. Didn’t work either. We just “smooth iced” it using Wilton’s butter cream icing recipe- you can Google this, easy to make and is semi-moldable. (tip: instead of the milk it calls for I ended up just using one of the larger bottles of food coloring to color the icing. Worked great and was only $1 versus the $8 for the specialty concentrate color). Once the icing air dried a few minutes – really like an hour we were able to pat the side smooth with our hands.

The scales on top are shortbread chocolate covered cookies cut in half or however you think looks best. We trimmed them smaller as we went down the back. Also sprinkled a little green and red sugar “glitter” because we had it I guess.

For the eyes I put a big dab of the white decorator icing from the store and red in the middle and let dry (make take several hours) then placed on the face. I also had added a small piece of cake to build up the head a little. It took some working, for a while it looked like Matter from CARS. But that’s the great part this icing is pretty forgiving.

Ok and so on, I just “mushed” down the icing to make brows and nostrils. Used the orange slice candies cut in half for the claws, but later I thought candy corn may have been better, they were a little big.

Now the coolest, about ten minutes before the party we decided some horns would be cool, so we are running around trying to find something to use, we tried forming the icing, and well ended up with green fingers. Then we had peppermint Hershey kisses, too fat. So I took a small sharp knife and just trimmed down the kiss (like old school pencil sharpening) untill it looked like a horn, and it turned out awesome as the red tint matched the eyes perfect.

Then smashed up some graham crackers for dirt.

Now for the Volcano, that was an after thought. All the cake was yellow, and well some people like chocolate. In comes the volcano. (was gonna be a mountain at first but volcano is cooler!) So I just baked the chocolate cake in my Bake-N-Fill cake pan (can use a Pyrex bowl, whatever you have got). Mix a little more icing, this time red coloring. I let the cake cool a little but not completely before “glopping” the icing on top. This made the lava more real as is warmed it separated a little and ran down the sides (If you happen to end up starting to look like a red mountain (too mush icing) just make a hole in the middle for the icing to run down). 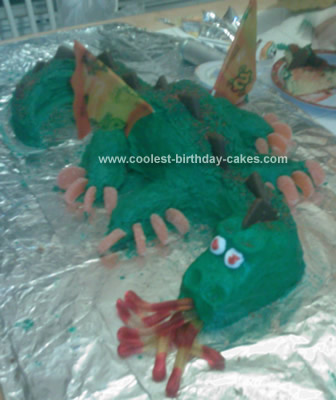 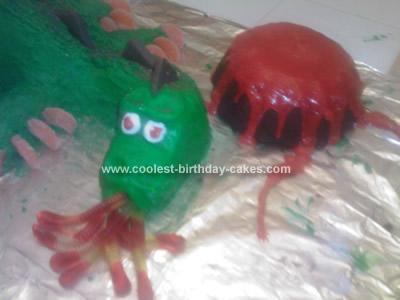