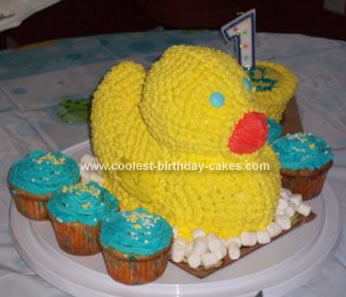 My son loves ducks! They are his favorite bath tub toy. I was trying to think of a neat theme for his first birthday and since I had just decorated his bathroom in ducks, I thought WHY NOT? He just loves them! I had tons of different color ducks in his bathroom so to make a duck cake would not be too-hard.

Well, I went online and found the 3-D Ducky pan (Birthday Express)(which you can get cheaper on EBay). I read all the reviews on the internet before attempting it. Thanks to all of that great feedback! I think it helped a lot! I went exactly by the directions. I made butter creme icing for everything.

I did use pound cake instead as directions stated. I had no problems with the duck sticking to the pan either. I decorated everything myself.

I made cupcakes with blue icing for everyone. I put marshmallows around the duck to make it look like bubbles.

I had a cooler filled with mini-drinks (assorted) and mini bottles of water.

Decorations: I had 10 blue, yellow and white balloons and 2 big HBD balloons. I had the ducky table cover with the frog on it. I had Tanner’s picture in a frame so you could sign it. I had little ducks sitting around every where. I had party favors in ducky bags with a duck, bubba teeth, assorted candy and whistles.

I was very pleased the way his party turned out. I am a first time Mom and I just felt it had to be special. He may not know it, but I would know it! The cake is not that hard. Just take your time and concentrate. Go by the directions.