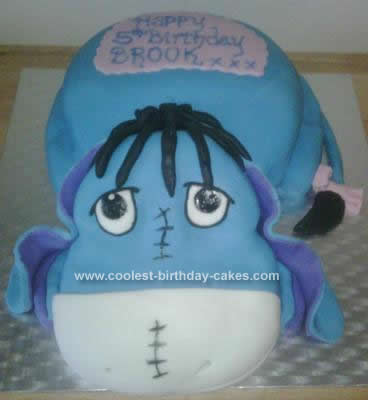 I was asked to create this Eeyore Birthday Cake Design for a friend whose daughter was going to be 5, all I had to work with was a small picture she had found on another website.

I began by baking a large rectangle vanilla sponge cake which I cut in half and sandwiched together with raspberry jam before cutting out freehand the shape of his head. I then baked three 9″ round sponge cakes (5 eggs and equal weight of ingredients as in the sponge cake recipe below) which I sandwiched with jam and sculpted freehand to create his body, his back legs were made from left over sponge.

When I was happy with the shape I covered the entire cake in vanilla butter icing and covered him in blue fondant icing, I used an ivory coloured fondant for the lower half of his face. I created the nostrils by gently pushing the end of my small paint brush into the fondant, his smile was created by running a knife gently along the bottom of the fondant.

I used black food colouring on some white fondant and a very small brush to create his eyes, the same food colouring and brush was used to create his facial features, his tail and pretty pink bow were made from fondant icing. I then attached purple fondant to the left over blue to create his floppy ears and also his front paws. I attached the ears and then finished him off with a little tuft of black fondant ‘hair’ I cut out a panel from some left over pink fondant and attached this to Eeyores body so I could write her name and birthday message.