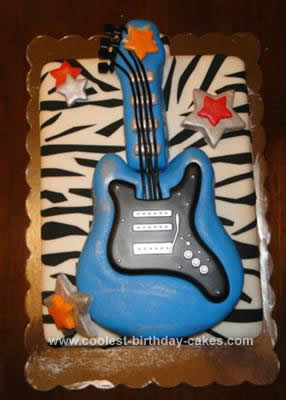 I made this Electric Guitar Cake for my friend’s son. He was turning six and having a rock ‘n roll themed dance party.

For the guitar I started out with the Wilton regular guitar pan and then ended up cutting it up to resemble more of a guitar. I did cut it into 2 pieces before I covered it with fondant (neck and base are separate), that was a tip I received from a friend.

All of the other cutouts on the cake were created with fondant and the strings were black licorice. The black knobs and black piece on the cake were plastic that I found in a DUFF guitar kit! Much easier and looked better than the ones I originally designed. And everyone thought they were real.

I also ended up dusting the guitar with edible glitter dust for effect! All of the silver pieces you see on the cake were gray fondant painted with silver glitter as well. I used the vodka and glitter mix as suggested on the package and it worked great! I just didn’t let the kids eat that part!

The base is a 1/2 sheet covered in white fondant then I used black sugar sheets to make the zebra stripes! That was actually a gluten free cake and I only used one layer!