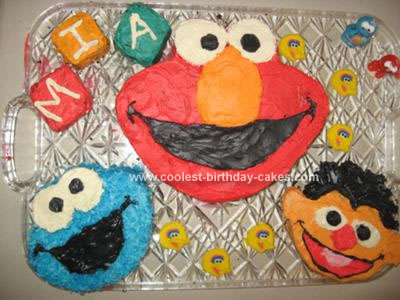 For my daughter’s 2nd birthday, her theme was Sesame Street so I made her this Elmo and Friends Cake. I had boxed cake on hand so I made two 9 x 13 chocolate cakes. For the first one, I blew up a picture of Elmo, printed it out, and used it as a stencil. The second cake, I cut in half. The first half was used to make a smaller Cookie Monster cake, the second half was used for an Ernie cake. Again, I printed off pictures and used them as stencils to cut the cakes into shape. With the left over cake pieces, I cut 3 squares which I used as blocks for my daughter’s name, Mia.

The icing is a basic buttercream colored red, blue, orange, green, and pink. I left some of it uncolored for the eyes and to write “Mia” on the blocks. I used a chocolate ganache icing and colored it black for the eyes, hair, and mouths. To make Cookie Monster furry, I colored some coconut blue and laid it on top of the blue buttercream I had spread on first. I also added orange flavoring to Ernie so all three of the cakes had 3 different flavors.