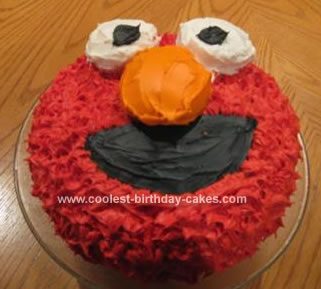 My 2 year old LOVES Elmo (I swear it was one of his first words), so a homemade Elmo birthday cake was a no-brainer. However, I couldn’t justify spending the money on an Elmo cake pan that I would use once.

This homemade Elmo birthday cake I made out of two 8-inch rounds, which I iced together. I then did the mouth first using black icing, created by coloring white frosting with Wilton food dye (WAY better than food coloring… mainly because it actually washes out of things… including my fingers!).

I used a flat tip for the mouth and then smoothed it over with a fork (I also simply used a freezer bag with the corner snipped off as my icing bag). I then used red icing, created by coloring white frosting with Wilton icing dye, I piped the icing all over the cake using a star tip to make it look like fur. I had some trouble on the sides, but was able to salvage the look by using a fork to “fluff” the icing once I was done.

The eyes and nose were cupcake tops. The eyes were simply frosted with white icing and then I used leftover black for the pupils. The nose was a cupcake that, fortunately, was a bit mis-shaped to look like Elmo’s nose (that was frosted with icing dyed orange).

I did find that refrigerating the cake overnight after I iced it helped it set and actually helped make the fur look better. My son loved his homemade Elmo birthday cake… he kept asking to see it all day before the party!