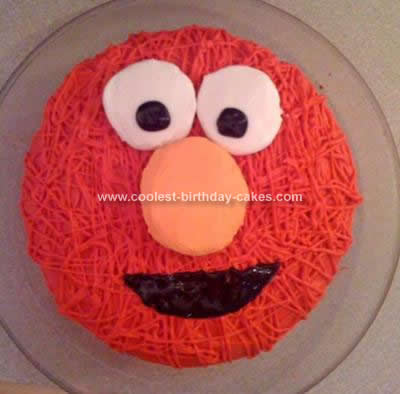 I used red velvet cake mix straight from the box, baked into 3 8″ round pans for this Elmo Cake Idea . In between the layers I used cream cheeses frosting, but used just basic white for the outside. It took a whole jar of Wilton no-taste Red to get the color for the outside, just mixed it with a large can of white icing.

At this point I refrigerated the cake overnight to avoid the dye of the red icing soaking into the white of the eyeballs. Eyes and nose were also made out of Betty Crocker Easy Squeeze icing. This icing came from the grocery store as well, it was specifically for decorating and came in a small bag with a screw top on it (it was NOT the kind that comes in the white plastic tube). It was thick and impossible to squeeze out even though it’s called “easy squeeze”. I made round balls and flattened the out to make the eyes. I smoothed the surface by running the icing spatula under cool water and lightly touching the icing and then froze them for about 5 minutes until the icing was firm enough to lift off of the plate with an icing spatula.

I mixed the same firm easy squeeze white with red and yellow dye to get the orange nose, then refrigerated the colored mix for 5 min to firm the icing up enough to roll into and ball and flatten like the eyes. Mouth and pupils were drawn on with black gel icing.