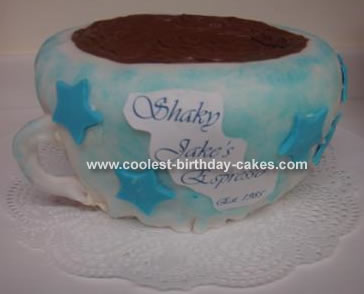 I made this Espresso Cup cake for a friend. He loves espresso so I thought this would be fitting. The cake took 1 box of funfetti cake mix. I made it in a glass pan that I use for mixing the batter (bought from Pampered Chef). It took much longer to bake because of the shape.

After it was finally baked I let it cool and frosted it with buttercream. I then covered it with white fondant. This was a little bit of a task since the cup isn’t a traditional cake shape. I had to cut two sections, when covering it with fondant, and used buttercream to keep those parts together.

The stars on the cake are also made of fondant and stuck to the cake with buttercream. The handle is a pretzel wrapped in fondant and stuck on with buttercream. As for the blue on the cup, I used blue cake gel and rubbed it on with a moist paper towel and it gave it that effect. The “coffee” on top was chocolate candy melts melted in a Ziploc and piped on and arranged with a tooth pick. The chocolate hardened quickly.

My friend couldn’t believe how cool his cake was!