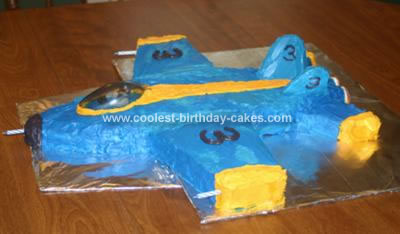 This FA 18 Blue Angels cake was requested by my son for his 2nd birthday. It took me a year to get up the nerve to try it and finally made it for his 3rd birthday.  I looked at lots of pictures of F/A-18 Blue Angels and also looked at several different cakes online.  I knew that I had to create it myself since I couldn’t find a cake pan for this type of airplane.

I began by taking a rectangular sheet of paper that were the same dimensions as a half sheet cake (approximately 11 x 15). I started to mess around with how I could best utilize the entire cake.  I came up with a pattern that looks like the attached diagram.  I baked a traditional yellow box cake.  For a half sheet, you will need two boxes.

Once the cake was baked and cooled, I put the cut-out pieces of paper on top of the cake and cut it with a bread knife.  I placed the pieces together as the diagram shows, and began to ice it.  I used a traditional buttercream frosting.

For the blue color, I found “neon” food coloring at the grocery store.  The blue was perfect. (I did have to use almost the entire bottle).  I iced the entire body of the cake blue before adding any of the yellow detailing.  I then took 2 sugar cookies and cut them out into the shape of the tail fins.  Do not ice them until the last minute as they will get soggy.

I then took the clear plastic cockpit off of one of my son’s many toy airplanes. I also took one of his toy pilots.  I placed the pilot down into the cake and then put the cockpit cover over him.  I then piped the icing around it.  In the back for the afterburners, I used a little gummy candy that I found called Peach rings, they looked perfect.  I put a candle in the front of each wing and in the front of the plane.  They looked like missiles.