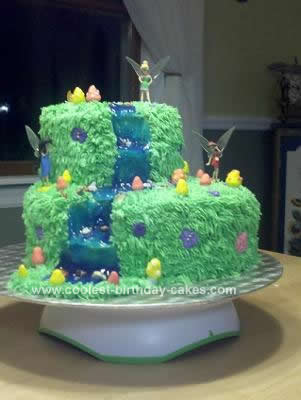 This Fairy Cake Design was created using a 10 inch and 6 inch round cake. I used the large Wilton straws for the supports for the 6 inch layer. I also used a longer straw to dowel the cake. To make the central dowel on the cake I cut a whole in the six inch board. I put the dowel in the main cake and then sat the six inch on top of it. This allowed me to have the support for transporting but without the hole in top of the cake.

I used butter cream icing and the grass tip to ice the cake. The entire cake is iced with the grass tip. I also cut out about a 2 inch square out of each layer to get a gradual waterfall. For the waterfall I used piping gel and colored blue. The mushrooms were created out of fondant and I also used store bought candy rocks. The fairies were bought at a local toy store and placed on the cake.