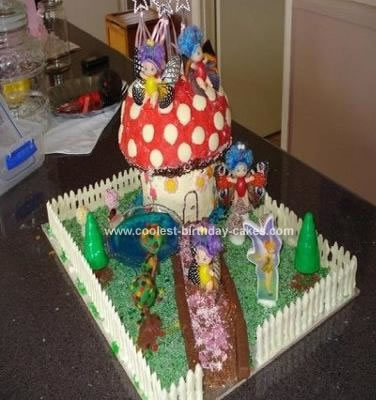 I made this Fairyland Grotto Cake for my daughter’s 1st Birthday, everything was edible except the fairies, the wands, the glass bowl the jelly is in and the candle.

The bottom of the toadstool is made of Banana cake so that it would be able to take the weight of the mushroom head. To get the shape I wanted for the bottom part I had to use a cooking pot which I removed the handle from as I just couldn’t find a cake tin that was suitable. The icing is just a butter icing without any colour added. I used an icing bag to pipe it on then smoothed it down with a knife. I had some edible glitter pens which I used to draw the door on with and some decorations down the side. I had also made some flowers from different coloured fondant and let dry for a day or two.

For the top of the mushroom, I made a vanilla cake which is very light and fluffy. To get the shape for this part I used one of my stainless steel mixing bowls. I used a red fondant for the icing which I layed out and rolled till it was quite thin and large enough to over hang the cake. the little white dots on the top are just white chocolate buttons which I glued onto the cake with melted white chocolate so the wouldn’t slip off.

When I started decorating, I realized too late that I shouldn’t have decorated the cake board with the coconut for grass until after I had the cake iced and in place.

To decorate the cake board I made green icing and layered it evenly and then sprinkled desiccated coconut which I died green with food colouring, this was the grass. I had some mini flakes in our freezer which i tried to melt down and found they wouldn’t melt so I decided to use it as dirt and made a dirt path out of them and then lined the path with the rest of the flake logs.

The little mini toadstools were made out of chocolate covered marshmallows on top and normal marshmallows for the bottom. You cant see in this picture as they are hidden behind the candle and mini mushrooms but I also handmade some snails and ladybird bugs and put them around the place. The blue stuff is jelly which I made the night before.

The kids loved the whole cake and especially loved demolishing it!