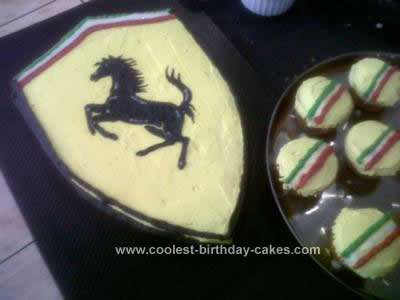 It all started with my craze for cars and racing, since I could not design my own ideal birthday cake, I decided that since its my Dad’s 56th birthday let’s tribute him with a classy Ferrari Badge cake.

The cake mixture chosen here is Red Velvet, fitting for a 56 year old and for a Ferrari theme. The cake was baked in a rectangular tin and I printed out the shield placed it over the rectangle and cut out the shield. The icing was white butter icing and colored accordingly.

The horse was the most fun part, after smoothing out the yellow with a card I placed a hand cut out stencil over it, but placed cake in the fridge for 30mins so yellow icing was hard. The stencil I used was a logo I printed and cut out with a sharp blade.

After placing the stencil on the yellow icing I used an icing bag with a medium flat nozzle, in the bag was black icing standing at room temp for a few hours to soften well. Holding the stencil down I ran the nozzle with icing over it covering entire stencil surface, removing stencil as soon as this is done, was left with a perfect horse, the detail on the horse was done making a soft running icing with icing sugar and milk, placed in a plastic coin bag and cutting a small hole in one tip allow icing to drip out.

I think this was not a bad first attempt. 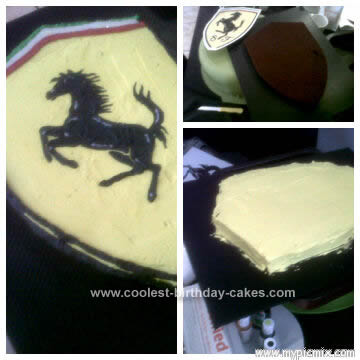 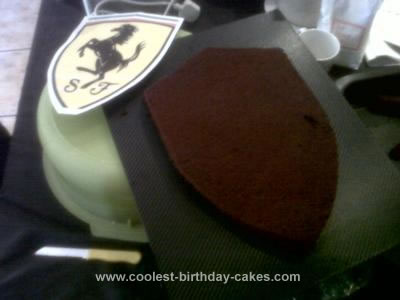