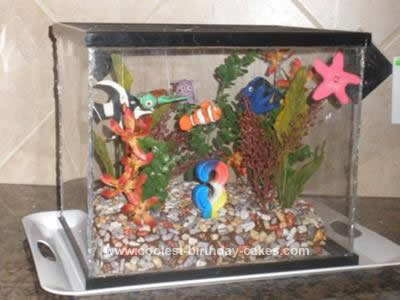 This Homemade Finding Nemo Aquarium Cake was made by hand (with the exception of the plants). The characters were sculpted from Play-Doh 2 days before to give them time to dry out. I put 1/2″ long beads through the top of them before they dried to feed fishing wire through them once assembled.

The “aquarium” was built with 2 metal picture frames & plexiglass hot-glued together. Window mesh was also glued to the top in order to suspend the characters. The bottom was left open so the whole thing (including attached characters) could be lifted off at one time.

The cake was a homemade 2-layer (pumpkin on the bottom & white on top)frosted with chocolate icing & chocolate rocks pressed in.

The greatest part was everyone’s reaction when they finally realized that this was the cake and not just an “aquarium” in the middle of the table! 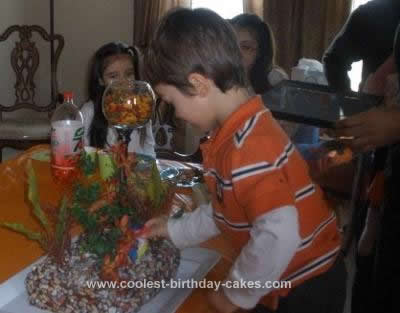