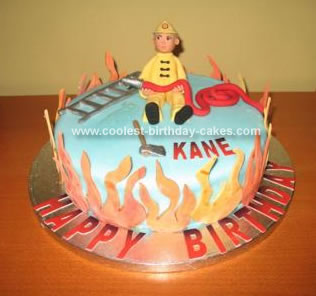 This firefighter cake was made for a friend’s boyfriend who is a firefighter.

I made the firefighter out of fondant icing mixed with some CMC powder I made him over a period of three days. The hat was a pain to do but I got there after oh about 8 attempts.

I love the worried look on his face I made it look like he has run out of water I put a small drip on the hose and a small puddle on the cake to make it look like water I used piping gel. And what with all the flames around him I would be worried too! The flames were also awkward but it was well worth it in the end.

Feedback from my friend was…..FANTASTIC….phew!