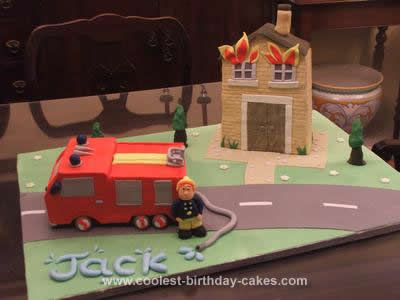 I wanted to do a cake for a little fan of Firemen Sam but I wanted to do more than just the Fire truck so I thought of creating a scene wherein Fireman Sam is in action with his fire truck trying to control a house on fire.

First of all I covered a large board with green fondant and then I did a grey fondant stripe and placed across the board so that it looks like a road. Fireman Sam and the truck were not the first time that I did them and I found one of Debbie Brown’s books very helpful.

I placed the truck on the left side of the board and place fireman Sam next to it. I wanted to write the birthday boy’s name and had the idea to write it with blue fondant so that it looks as if the writing was made with the water coming out of the pipe and to make this more realistic I added also some drops.

For the house I did a rectangular cake, cut it into 4 pieces and put them on top of each other. I cut the top piece to form the slanted roof. I covered the whole cake with beige fondant and the roof with brown fondant then with a ruler I marked the whole cake to make it look like bricks.

Finally I added some touches like the flowers, the road marks, some trees and a chimney.

The birthday boy was extremely happy with the cake and really wanted to move the truck up and down the road!!.