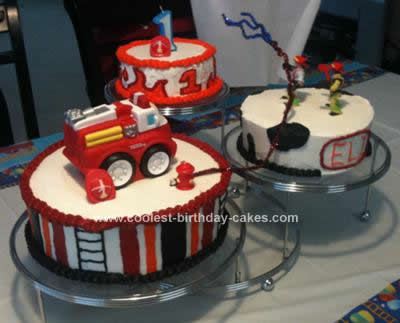 I made this Firetruck 1st Birthday Cake for my nephew’s 1st birthday. It was lots of fun to make. I started with two 10″ cakes, two 8″ cakes and one 6″ cake. I frosted all of them white. Next, I frosted the 10″ cakes using the red, black and orange stripes. I also added black ladders up and down the sides of the cake. I used a toothpick to draw my lines and then I added the frosting.

On the 8″ cakes, I decided to do Dalmatian spots. I used a tooth pick to draw my lines again. On the 6″ cake, I frosted flames since this would be the cake that had the candle on it. I did a red outline and filled in the flames with orange. I bought the fire truck and the firemen to put on top of the cake which was also used as the birthday boy’s present. I intended on using some sort of vacuum hose or something like that as the fireman’s hose but what I bought didn’t work, so instead I used the pipe cleaners. They worked really well as water spraying out of the hose because they would stick out and stay in place.

Finally, I just added the candle and it was finished.