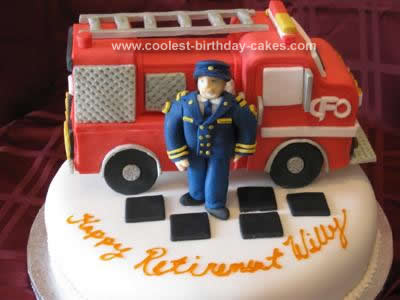 This Firetruck Retirement Cake was actually made for a Captain who was retiring from the work force. His lovely wife asked for a carrot cake because that was his favorite cake! The base was made and iced with cream cheese frosting. Once is set up the fondant was added and refrigerated. The truck was constructed out of Styrofoam and the fondant was cut and added using royal icing as ‘glue’.

As the pieces dried, I added more details and allowed them to dry. The figure of the Fireman is made completely out of fondant. It was done over a week as the pieces need to dry and become firm. I used graph paper to free hand construct his suit and ‘glued’ them on using edible clear paste. His teeth are anatomically correct (only because I work in a dental office)!

What fun it was to see his face when the cake was delivered to the fire hall on his very last shift!