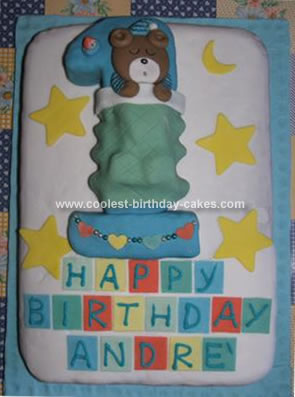 I made this First Birthday Cake for the 1st birthday of my friend’s son. She left all the design in my hands so I didn’t want to disappoint her.

When I think about babies, somehow teddy bears pop up in my mind and at the same time I wanted to include a big number 1 figure. Therefore I thought about having a cute little teddy bear sleeping on a number 1.

I baked two rectangular cakes. One bigger than the the other. I sliced the big one and filled it with jam and butter cream and then I covered it in white sugarpaste.

From the smaller cake I have cut a number 1 figure and covered it in blue sugarpaste. I positioned the number 1 cake on top of the big rectangular cake, on the upper part of the cake not in the middle.

Last but not least I did some coloured sugarpaste squares and piped a letter on each one in order to read HAPPY BIRTHDAY ANDRE` and put some yellow stars all around the cake.