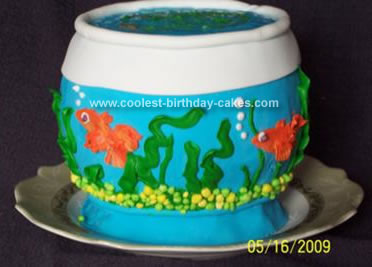 I was asked if I could make something for a birthday and his favorite thing was his fish. I tried to find what I wanted to do but no one had just what I was looking. So I made him his own fish bowl birthday cake for his birthday.

I first made a cake in one of the ball forms cake pans. With the two halves I cut off the tops to have a flat bottom and top for the bowl. I used one of the pieces I cut off and cut it again to make it the base of the bowl. I placed it together and frosted it with some frosting then put in the fridge to get it cold before I started on the rest. I did use three dowel supports in it.

After it chilled overnight, I then covered it in the blue fondant for the water and placed white fondant along the top. The top rim is fondant and I put piping gel on top to give it the water feel.

Along the bottom I piped in green frosting for the rock’s to stick to and made the assorted grass. The rocks were Nerds candy, which these were the sour ones and people said the tasted great with the sweet cake. The fish I made with fondant and put some frosting accents in for the fins and eyes. The bubbles were just frosting dots.

This cake was a huge hit with the kids and the family.