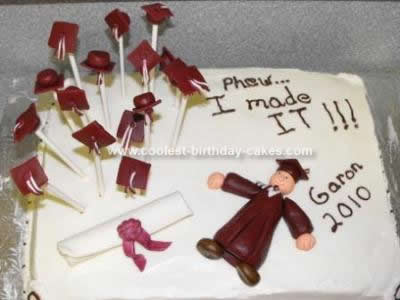 This Flying Caps Graduation Cake is a ½ sheet cake, which I made half chocolate and half white cake. It is frosted with buttercream icing and all of the embellishments are made with marshmallow fondant. In hindsight, I think I might have tried using clear straws to support the hats rather than lollipops sticks. I’m not certain that the clear straws will hold up, but, if they do, the effect would be nicer.

To make the hats, I rolled relatively equal sized balls of colored marshmallow fondant for the bases. I used my thumb to press against a piece of parchment paper to make thick circles. My thumb made a nice imprint for the underside of the cap. I rolled out additional colored fondant into a long rectangle and then used a pizza cutter and a ruler to make squares for the tops of my caps. It is important to let the tops dry so they will not curl when you place them on the cap bases.

Equally important is to keep the bases sealed in an airtight container so they will not dry. They will need to be soft enough for the sticks to go in. Roll up tiny balls of fondant for the button on the cap. To make the tassels, roll out thin strips of colored and white fondant and then make even thinner strips with the pizza cutter. I found that four strands made a nice looking tassel and it wasn’t so thick that it looked odd.

Once the tops are dry enough to prevent curling, adhere them to the bases with a finger dabbed in water. Now, stick the sticks in the bases at various angles. I even did some completely upside down. Use a finger dabbed in water (a very tiny dab) to adhere the tassels and then buttons. Make certain that the tassels fall/fly in the appropriate direction. Place the sticks in the cake at various angles and trim any sticks you want shorter. This is a relatively thin cake so make certain that all of the sticks are pushed all the way down to the cake board.

My graduate was just a case of some fondant cones for the body and arms, creased and dented for a little detail. I cut a thin layer out of the neck of the gown in the shape of a triangle and placed a piece of white fondant there for the shirt. I cut out additional pieces of white fondant for the collar. The nose is fondant, the mouth is an indent, and the eyes are white fondant with black pupils drawn on with a food marker. I decided to have him lying down as if he had fallen back in relief, because I didn’t want to mess with the support issues of having him standing. I knew the cake would be moved several times and I just didn’t want the hassle. I made his tassel and tie lie appropriately.

The diploma I just threw in because I had extra fondant. I rolled it out and then rolled it into a scroll. I curled up one corner and threw on a hand carved seal and ribbons.

This Flying Caps Graduation Cake was just a compilation of a couple of ideas that I had. I wanted a cake with caps flying in the air. I hope you can use something from this cake to make an amazing creation of your own.

Cool Homemade Graduation Cake With Books and a Cap