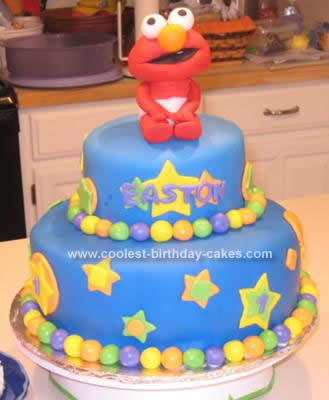 This Fondant Elmo Birthday Cake is a birthday cake we made for a 1 year old boy’s birthday. It is a vanilla cake with buttercream icing and totally covered in homemade marshmallow fondant. The decorations are also made of fondant.

We used Wilton cutters to cut out the decorations. We did this the day before in order to give them a chance to dry and be easier to work with. We attached them to the blue fondant covering using clear vanilla extract. It worked much better for us than using water. In the past we’ve piped a ring of icing around the cake to stick on the little balls of fondant. This time we put a dot on each ball individually- it was more time consuming but gave the cake a cleaner look.

Elmo, while a simple character, is the hardest character I’ve ever made! The one on the cake was my third attempt. His head is bigger than his body and would sink down on the dowel rod and I’d get a chubby Elmo with a “horn” coming out of his head! On the third and final version of Elmo we made the body and head and then hollowed them out and added marshmallow rice treat to the hole. It made them sturdier and lighter. I made the eyes and nose ahead of time to let them harden.

For the diaper I rolled out white fondant and cut it into a triangle and place it on the body before adding his legs. To place Elmo on the cake we cut a long dowel rod that went through the top tier to the cardboard round inside. I measured where his head would sit and hot glued a very small disc of cardboard to it. So when you put it on the dowel would go through his body and into the cake and then you’d place the head on. I normally believe in using as few inedible elements as possible but I didn’t want Elmo to become a unicorn! We even took it off the cake and I went over to my friend’s house to put it on just before the party to prevent any Elmo mishaps.