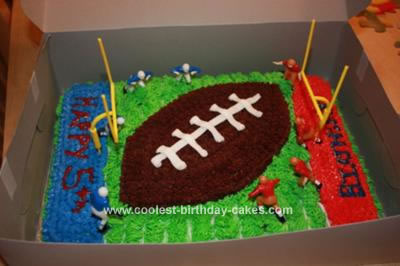 I made this homemade football field cake for my nephew’s 5th b-day. I baked a basic 9×13 cake and once cooled I trimmed the top to make it level. Using the trimmed pieces I formed the football on the top of the cake. Using the star tip and chocolate frosting, I covered the football. Using the same start tip and blue and red frosting, I made the end zones. I then used grass tip and green frosting and covered the field in grass.

I trimmed up the football and field lines with white frosting and wrote the Happy Birthday in the end zones. I bought the foot ball players and goal posts at a party supply store.