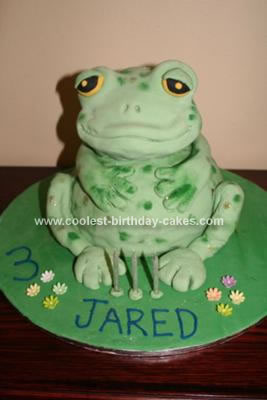 I shuddered when my nearly three year old said he wanted a FROG cake!

I found a picture of this homemade Frog cake with directions on the internet. I baked two round cakes in pyrex bowls, small and large. I placed the smaller dome on the larger one and then began to ice. I used plastic icing to ice the frog and make his arms and legs. I copied the picture I had seen and sculpted his mouth and eyes with additional plastic icing. I used the back of a paintbrush to mark his nose and mouth. It was my first attempt using plastic icing; it was easier than expected and such fun too!