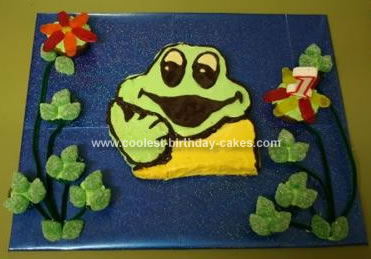 My son has the most enormous smile on his face constantly and has earnt himself the nickname “Freddo” for it!

I traced a Freddo Frog outline of the face, and following an idea from this site cut the frog cake out accordingly, then followed the face line on baking paper using dark chocolate. When it set, it was then easy to peel off!

The cake is in 3 pieces: the face, the shoulder (yellow t-shirt) and the ‘thumbs up’ which all joined together and I free-handed dark chocolate around the joins to make the shape. I also used butter icing FYI.

Once I laid the dark chocolate facial features on, I added non-coloured butter icing to highlight Freddo’s eyes, although on reflection, it would be better to put the icing straight on the cake and lay the eyes on top, to save wiping icing from the dark chocolate after!

I coloured a board underneath the cake with dark sparkly paper which I think adds to the effect of making Freddo stand out, and then added in a little garden by using mini cupcakes. The leaves are spearmint leaves (3 to a cupcake) and the flowers are from a normal size muffin pan. For the petals, I cut the legs off frog lollies into petal shapes. The stems are not edible: they are green pipe cleaners.

Thanks, I hope this helps! I have had a lot of fun making it!