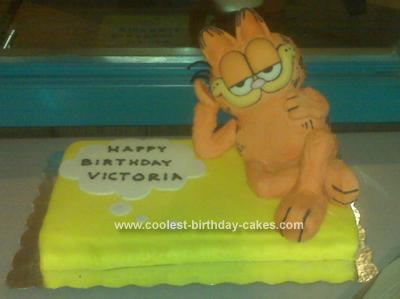 I made this Garfield Birthday Cake for my brother’s daughter. She loves Garfield and he could not find a good store cake.

The cake is an apricot brandy pound cake with real butter cream frosting. I covered the cake with yellow fondant and made the happy birthday sign to look like a comic bubble. Garfield is made out of rice crispies and royal icing.

I sculpted the pieces separately and stuck them together with a lot of toothpicks and skewers. Then I covered the entire body and arms with a thin layer of royal icing and let it harden overnight. The next day I used my micro plane grater and smoothed the royal icing by shaving off the bumps, especially around the joints.

I made the face out of fondant and secured each piece to the head with toothpicks and royal icing. The ears I made out of fondant too and used toothpicks for support inside the edges of the ears. The whiskers are black licorice string with a toothpick carefully inserted in the base to secure them to the head.

To cover Garfield I thinned out my royal icing so it was a little on the watery side and smoothed it all over. I used black royal icing for the stripes. The black lining around the facial features was also piped on. I would have rather used royal icing or licorice but I didn’t have time. It would have worked better. The lines would have been perfect.

I placed Garfield on the corner because he came out bigger than I anticipated. But he was supposed to lie across the back. Use supports to hold up Garfield so you won’t have any sinking. I made a lasagna to go right in front of him but I forgot to put it on. I made the lasagna pan out of gum paste. The lasagna strips were made from gum paste too, I used my wavy edge ravioli cutter to do the edges of the strips. I used a grated to shave off white fondant for the cheese.

I mixed corn syrup, red food coloring, and a little cocoa powder to make the sauce (the cocoa powder is so the sauce won’t look clear). I made all the pieces separately and assembled like a regular lasagna.